For the third and concluding poem of the Surface trilogy we travel out from the human mind to its stories, myths and legends.

Whether these derive from good imaginations or something more spiritual I don’t know; as with poetry, many times we don’t know where the ideas come from. Maybe one day we will…

The poem demonstrates how humanity across the world has looked above and below the surface for inspiration for its myths and legends.

The poem starts and ends with Greek examples, and has ones from Indian, Celtic, Sioux and Norse in-between.

The words per line mirror, and are presented below in the way they are structured in the six paragraphs of the poem:

Icarus flew with God on wings and wax
above ancient Greece,
but became intoxicated by the sun,
and expelled from the legendary
flying club
just as it was getting to be fun.

Jatayu and Sampaati played with solar winds
as vultures in the skies
of Hindu mythology,
but Jatayu got too high,
and in saving his brother
Sampaati relinquished his right to fly.

Lugh and Bran battled in old Celtic skies
year in ,year out,
over day and night, light and dark,
people on the ground would light a spark
to mark the time when each came back.

On the surface, human imagination travelled high and low

a chief’s son was lost underground while riding
to hunt buffalo that was revered for providing
their food and warmth, magic and reason
this season, next season,
In Sioux mythology a subterranean lesson wasn’t treason.

Odin rode to Helheim for Baldr,
his beloved son of Frigg
lost in the ninth realm
of Norse mythology.
Sleipnir carried the magic muse
but only to a Volva’s dreadful news.

Travelling home from the Trojan war to Ithaca
an odyssey
Odysseus took his men underworld
to the River Acheron in Hades
to meet Tiresias
and receive advice known only to the blissless.

Today we have the second part of Marc Latham’s Surface. Please see the first part of the poetry trilogy for an explanation to the series.

Marc has made a slight adjustment to the first poem in the trilogy after viewing it on this site: there were two uses of the word ‘under’ in the bottom half of the poem, and the second has now been changed to ‘below’. A benefit of putting the poetry up on site!

This poem turned into a bit of an epic, and I probably have people who have pushed the boundaries of the form before to thank for that, like Sarah, Caroline and Wendy.

At first it was just meant to be the top half, with the surface line as the folding middle line, but then I thought that it works both ways, so I doubled it to include the bottom half, and made a new folding middle line: that image and self work both ways. I think this makes a good reflection, but hadn’t thought about it that way until I’d completed the top half.

I’m not trying to expose anything, and don’t think it’s anything really groundbreaking; it’s mostly based on information that’s out there already, together with a lifetime of experiences.

Hopefully it makes a good and interesting Folding Mirror poem.

Bloody hell, where do I start!

No, it’s quite simple really, with both halves of the poem mirroring themselves, and the poem as a whole mirroring.

Both halves have a sequence of:

either side of the six words folding middle line of ‘Image and Self work both ways’.

The punctuation also mirrors, but it isn’t really grammatical anyway.

Surface 2: Human Image and Self

Image and Self work both ways

Today we have the first of three poems that make up the Surface trilogy.

All three poems appeared in the Autumn etips, and this first one will also be published in the Tips for Writers magazine. All are available from the Norfolk poets website.

Thanks to Wendy Webb and the Norfolk poets for publishing them and allowing their use here as well.

The idea for the trilogy kind of came to me one sunny day that seems like a long time ago, but was in fact early this summer; the same summer we are still in, but the good weather seems a long time ago!

The idea for this first poem came to me while I walked in nature, and then I thought of doing the surface of humanity, and then further into the abstract with myths to complete a trilogy.

I hope it works for you and you enjoy it.

The Surface poem just tells the story of what animals you may see at different height and depth levels either side of the surface; starting with the highest flyers above it in the top half of the poem and working down to the surface in the middle, and then working down from the surface/middle to the lowest depths of the oceans in the bottom half.

There is a full stop in the same place in each half: at the end of the fifth from the outer.

eagles and vultures soar majestically at high altitude
crows and kingfishers fly without such attitude
sometimes level with squirrels and possums
scampering along branches of blossoms
under the summer sunshine.
Upon colourful flowers and new leaves
dragon and damsel flies look the bee’s knees
fawns and lambs frolic in the sun
new life abounds at every turn
above the

surface of water and land, which

give cover
for species living under the ether
moles and hares hide below the weather
worms and ants create worlds that can hark
back to cave civilisations from dark
ages lost before enlightenment.
Brighter oceans with coral display
mandarins and angels seem to play
above sharks and rays that gracefully glide
but fangtooths and vipers were born to hide

This is a revised version of Some Clouds Have a Silver Lining, turning it from horizontal to vertical.

There are three new Folding Mirror poems by Marc Latham in the Autumn issue of the etips poetry magazine, which is available from the link.

Wendy Webb also talks of Folding Mirrors appearing across the web, including one from Romania, so that’s great news for the form…and hopefully poetry.

Hope you enjoy them, and I’ll be putting them up here over the next three days too.

First part of a two part documentary about the poet Lord Byron in Europe on Channel 4 tonight at 9pm too.

Today we have what is probably another first in the short history of Folding Mirror poetry, as Marc Latham brings you a vertical poem. Over to Marc:

I thought of the idea of a vertical folding mirror poem when I was walking to work one day.

On the edge of the cloud before the clear sky there is often a gold lining where the sun is lighting it up; don’t know if that’s where the old adage about ‘every cloud has a silver lining’ comes from.

So I thought of creating a Folding Mirror poem that could capture that imagery, and thought that doing it vertically, which was how I saw and remembered it, was the best way.

The first vertical Folding Mirror poem came from that.

I swapped the setting to the beach, as that’s what came out. I think the plinth was inspired by Wendy Webb’s account of seeing Crysse Morrison read poetry from a plinth a couple of weekends ago.

As the poem works vertically it can also be read vertically from top to bottom in the three columns.

The text fits pretty well into a mirror either side of the middle folding line. The words per top paragraphs are 11-2-11, in the middle paragraphs they are 14-2-12, and in the bottom paragraphs 15-2-15. 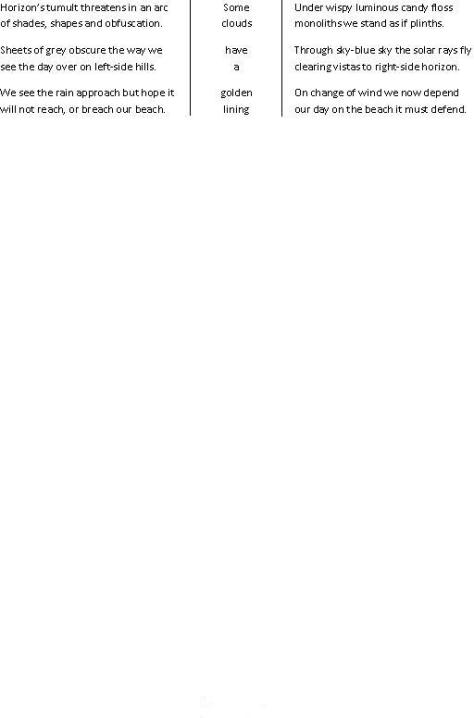 Folding Mirror poems and features have now been published at:

Marc Latham has written an article about the Folding Mirror form for the Suite 101 Poetry Section.

The article provides an overview of the poetry form, as well as detailing some of the publishing successes for Folding Mirror poems.

Marc Latham’s Planet Earth and the Universe is the poem of the day for July 21st on the every day poets website.

I hope you’ll visit and enjoy the poem…and give it a good vote! Cheers.

Today we have a poem by Marc Latham with the equinox as the subject.

This gave me the idea of comparing the feelings and activities of people who take notice of the two days, either side of dividing middle line explaining the equinox.

The punctuation and line lengths also mirror each other quite accurately.

At the end of March spring breaks out
dark and light co-exist together
day in, night out, tis the time to rejoice
long days to look forward to, warm nights to celebrate

Equinox days in the northern hemisphere where all is equal

summer memories to recall and store, winter knocks at door
night in, day out, its a season to reminisce
light and dark evenly balanced
In October’s last days autumn has its grip