Hi, it’s Andy Wolfhol. The Olympics 2012 opening ceremony lived up to Greenygrey expectations, with the average British weather of dry and cloudy providing comfortable and authentic conditions for the spectators, and setting the tone for a very pleasant spectacular.

Green and Pleasant Land to Pandemonium

The Greenygrey provided the foundation for the opening ceremony, with the green and pleasant land giving way to the Pandemonium of the grey industrial revolution written about by John Milton in Paradise Lost.

As the grey skies darkened it was time for the lights and fireworks to star, and the Greenygrey could rest knowing it had done its job; and what a fine stint it put in.

Good on Humanity, no Animal Representation

It was nice to see all the UK represented in London 2012, but a shame that no wild animals were symbolically represented.

It was a great occasion on the human side though, and nice to see the Queen joining in with humour (in the film anyway!), the NHS and builders represented, those lost in 7/7, and the future generation lighting the torch. It was also great to see Team Ireland wearing a spectacular Greenygrey uniform.

Here’s our Greenygrey photo highlights from the Olympics 2012 opening ceremony:

The Red Arrows fly over the Olympic Stadium: 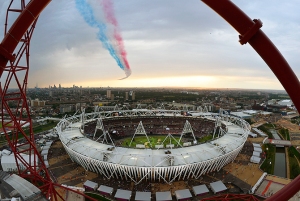 Greenygrey Britain is represented as an ancient pleasant land: 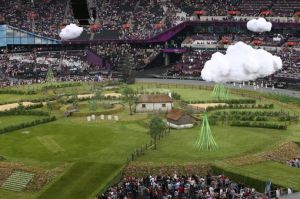 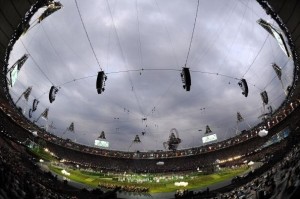 Team Ireland choose a Greenygrey uniform for the opening ceremony: 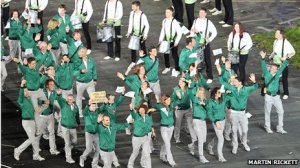 Now, on with the games…