Marc Latham’s central site is the Greenygrey (http://www.greenygrey.co.uk), and he has books available on Amazon (http://www.amazon.com/author/marclatham).

Great news on the Folding Mirror book publishing front, as Marc Latham’s 242 Mirror Poems and Reflections was just sent to Kindle for review. It should be available soon if given the okay. 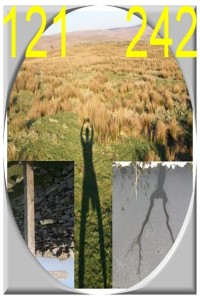 242 is Dr. Marc Latham’s second poetry collection, after the first one was published by Chipmunka in 2009. The first collection contained poems written by Marc from his youth to the creation of the Folding Mirror form, while this book focuses on the FM form recognised by Lewis Turco in his definitive ‘The Book of Forms: A Handbook of Poetics, Including Odd and Invented Forms’.

Caroline Gill, an award-winning poet whose ‘Thalatta, Thalatta’ Folding Mirror poem was used as an example in ‘The Book of Forms’ provides an introductory explanation of the Folding Mirror form at the start of this book.

This book contains 121 Folding Mirror poems created in three years by Marc Latham as he tried to make sense of the universe and life’s place in it. They are supported by 121 reflections relevant to the poems’ themes.

The poems and reflections were inspired by the deepest thoughts of a PhD graduate and world traveller, and his new research and observations on the above subjects. Before and during his world travels and university education, Marc was inspired by Romantic and Beat poets, Rock musicians and other writers and journalists who have trawled the mind for self-analysis while searching for knowledge about human nature.

Marc’s first collection featured bipolarity and ADHD in the title, and included several poems inspired by them. These topics feature again in this collection, with the poet finding the mirror form especially conducive for bipolarity poetry.

From his position in the average age’s middle-age, Marc’s poems and reflections in this collection stretch from humanity’s prehistoric past to our current space exploration and prospective future, while also comparing us with the animal world, and tackling the important social and environmental problems of the present.

Having focused on hegemony theory in his doctoral research, Marc uses his poetry to try and break through the cultural ‘norms and accepted truths’ of the modern monotheistic world to highlight alternative realities that could possibly improve conditions for plant, animal and human life.

Marc uses the two sides of the Folding Mirror poem to show at least two sides of arguments and issues, with the folding line in the middle either connecting or dividing the two halves.

There is also time for beauty and comedy amongst the digging and depression, and some poems and reflections provide colourful light-heartedness to lift the mood.

Several of the poems posted as reflections were written while Marc undertook a 100-mile trek to view Everest in the Nepalese Himalayas.

It is hoped that as well as entertaining the reader, the poems and thoughts will support the preservation of life and nature, and improve human understanding of itself and the world.

Today we have a clever and timely (sorry!) FM poem by Sarah James that was first published on her poetry site for the 21st Century Poets: Make it New project. It was inspired by the photo below it.

Thanks to Sarah for creating and sharing it.

Today we have the tenth and final ekphrastic poem interpreting and describing Romantic paintings.

Hannibal and His Men Crossing the Alps is the second from J.M.W. Turner, and is thought to have been inspired by a storm experienced by Turner on Otley Chevin near Leeds.

The storm fills the top half, and Hannibal’s army the bottom.

That’s All We Need!

In the ninth of ten ekphrastic poems interpreting and describing Romantic paintings we have the second from Thomas Girtin.

J.M.W. Turner, who was friends with Girtin and is widely considered to be Britain’s greatest landscape artist said that he would have lived in poverty had Girtin not died young.

Today’s ekphrastic (thanks Caroline!) poem is the eighth of ten in the series, and second by Thomas Gainsborough, who was the leading British landscape painter in the 18th century, and an inspiration to those who followed in his footsteps at the end of the century and in the next.

I just restructured this, and worked the poem from the top of the painting to the bottom, using the glowing sunset and campfire, which also mirror each other somewhat, as the folding middle line.

Copied from the Tate Gallery.

In the BBC’s recent Changing of the Bard programme Ian Hislop talked about the Romantics and described Wordsworth as an alcoholic, Byron an adulterer and William Blake a madman.

I like William Blake. For any film buffs wanting to see a good film with William Blake abstract relevance that the great man would probably have admired I recommend Dead Man.

And today we have the second of Blake’s paintings to be interpreted through Folding Mirror poetry.

This is a folding mirror poem inspired by Blake’s Dante and Virgil Penetrating the Forest (1824-7).

The human heads in the painting are used as the central focus, and the two sides of the poem start from the middle line and spread out to the beginning and end of the poem from the heads.

The middle line connects the two halves of the poem rather than standing alone.

Using this form, the poem draws attention to the similarity of the features at the top and bottom of the painting, while switching words around in the lines to create a reflective mirror effect.

Humanity Amongst the Pillars of Creation

heads talking in darkness, as if awaiting collection, for

Copied from the Tate Gallery.