Hi, it’s Greenygrey. I hope you enjoyed the Bergen photos. While travelling can seem like living a fantasy, Werewolf of Oz: Fantasy Travel by Google Maps is really a fantasy travelling book. I’m sure you’ve all been trying to work out the answer to Holly Valance‘s bubble and squeak teaser; unless you already know it!; so I think it’s time to head down under to the Werewolf of Oz for some comedy satire.

I’m delighted to say that Werewolf of Oz: Fantasy Travel by Google Maps was published on Smashwords yesterday, so it’s available for lots more Ereaders now: 40% of the book is available to read for free.

It is still available from Amazon for paperback and kindle, with image and link at end of this post.

Holly Valance has married billionaire Nick Candy since we met her, so her life has run a pretty parallel course with Grey, who is of course reunited with Green.

We wish Holly and Nick all the best for their marriage. While it was great to meet Holly in these episodes the main theme of this episode is the coming together of the team using the body, mind and spirit attributes they’d previously lost confidence in; as the Lion, Tinman and Scarecrow discovered they had all the courage, heart and brains they needed in the original Wizard of Oz.

And the quiet character coming good.

And no amount of additional ingredients could make Holly’s bubble and squeak smell any tastier than that day we met her on the outskirts of Gillian Taylforth… or was it Mel something.

77.  BODY, MIND AND SPIRIT… AND BONZ THINK of MELBOURNE

Tension
is no fun
when bubble
and squeak
free to dine
is on the line.

We tried to think how the name Gillian Taylforth was connected to Mel Gibson, but couldn’t work out any significant associations. Then Angry suggested the city might have another name.

I thought that might not be as crazy as it first sounded.

I remembered then that I had indeed renamed it before we arrived, but couldn’t for the life of me recall another name for it.

I felt dejected, but then Cathy gave a pep talk to raise our spirits, before offering to run back to the city to check the name.

I had renewed hope.

Elle thanked Angry and Cathy, and said they’d done enough; she’d like to make a contribution and check the city’s name. So Elle rushed back to the city, and when she returned she said she’d seen a sign saying Welcome to Melbourne.

It had been an outstanding team effort; utilising body, mind and spirit in the nick of time. I thanked them all. I wondered if their efforts had also answered the second question, because Melbourne sounded like it could well have been named after Mel Gibson.

I put this to the team, hoping Angry would continue his good mind form. But before Angry could say a word, Bonzo piped up, ‘Oh, Melbourne, that’s easy, I grew up here. No, it wasn’t named after Mel Gibson, it was after that pommie guy, William Lamb – 2nd Viscount Melbourne. Mel Gibson was in fact born in New York.’

We all looked at Bonzo in amazement, before giving him a big hug.

We gave the answers to Holly Valance, and she said:
‘You had your chance
and now you can hanch
on my best and scrumptious
bubble and squeak.’

William Lamb, the 2nd Viscount Melbourne, was Queen Victoria’s first Prime-Minister, and lived between 1779-1848.
pommie – Aussie slang for a Briton. 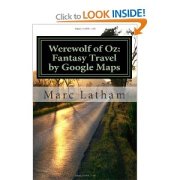 Hi, it’s Greenygrey. It’s that end of the week time of the week, which means it’s time for the second episode of Werewolf of Oz: Fantasy Travel by Google Maps. This one leaves off where the last ended; but we remembered to add that Hoppers Crossing and Riddells Creek are real places for this one… as well as Niddrie and Sunbury.

While Hoppers Crossing only plays a little part in the unfolding story played out over two chapters/episodes, Riddells Creek proves essential.

That is because a riddle creaking with nonsense is set in this episode over four literary nonsense poems. Then the Werewolf of Ozzers try and answer it in the next.

It is probably different in having bubble and squeak play such an important part in the storyline!

76.  HOLLY VALANCE HALTS OUR ADVANCE WITH A GAME OF CHANCE

A frog fellow called Kermit Croaking helped us across Hoppers Crossing, before we got an easy ride with Dennis, Peter and Jack all the way to Gillian Taylforth. We said goodbye to the Easy Riders on the edge of the city, before continuing by foot and paw.

We went walkie
up to Niddrie,
perused Sunbury,
were told of hungry,
by a honey bee,
so we continued northerly.

We were beyond peckish by the time we reached Riddells Creek; so we were delighted to see the Best and Scrumptious Bubble and Squeak stall on the side of the road.

We asked the woman at the stall how much it was for the fine looking fayre on offer. She replied:

My name is Holly Valance
and I’m going to give you a chance
to win all you can eat for free
by just answering a riddle or three.

‘We have faced many challenges on our journey,
so one or three more
is not as daunting a prospect
as it might have been a year ago.’
Holly Valance said that was great to hear,
and she was confident we would not err.

Then she revealed our Riddells Creek riddle, which had two parts. Firstly, she asked us to name the city we had just been in; and secondly, whether it was named such because Mel Gibson was born there.

We got in a huddle,
over a squeaky puddle,
ready to answer the Valance
knowing we could leave nothing to chance
for our bellies were starting to rumble
in need of a big brunch of bubble.

Hi, it’s Greenygrey. It’s that late midweek nearly weekend time of the week, so I think it’s about time for the first episode of Werewolf of Oz: Fantasy Travel by Google Maps.

This episode sees the epic poetry continue on the road, after the Werewolf of Ozzers leave Geelong and head to Melbourne; although they get rather confused about the latter’s name along the way.

This episode might especially appeal to film and television fans from 1960s cult biker movie Easy Riders to Eastenders fans of Kathy Beale (1985 – 2000).

75.  EASY RIDERS ON THE ROAD TO GILLIAN TAYLFORTH

We picked ourselves out of the gutter
without hardly a mutter,
but I did let loose a sigh,
as to Geelong Goodbye
we waved a long goodbye.

‘Where do we go now?’
Bonzo asked somehow,
sounding like a fine wine
sweet child o’ mine.

I said Melbourne was just north
and from this moment henceforth
we should call it Gillian Taylforth.

‘Onwards to Gillian Taylforth then,
the time is already half past ten,’
cried Angry with zest n’ zen.

A piper from the gate of lights
led us north to Hamlyn Heights
before a nice chap called Cornholio
showed us the way to Corio.

Lara gave us a lift to Avalon
where we joined the M1,
Cocoroc was a tasty aural treat
listening to music while you eat.

Gillian Taylforth (British actress).
The Piper at the Gates of Dawn was the first Pink Floyd album.
Sweet Child O’ Mine is a Guns N’ Roses song.
Cornholio is a Beavis alter-ego in the Beavis and Butthead cartoon.
Avalon is a Lara Croft film.

Hi, it’s the Greenygrey. I’ve just been picking out some quotes from the Werewolf of Oz book for our Shelfari page. I didn’t want to use any that give the story away, for those who don’t know it. Here’s the thirty: