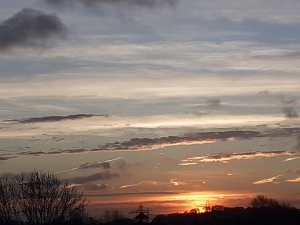 Just over a decade after my winter sunrises video there was a similar sunrise to the one featured mostly in that video this morning. As you can see, the sun now looks a little more northerly (to the left as you look at it), and it continues in that direction now until midsummer, moving from a southern-facing window to an eastern-facing one.

Because of the Earth’s tilt, in northern hemisphere’s winter, it’s as if we’re a human lying back looking out over ourselves, just able to see something above our body. In the summer, it’s as if we’re sitting up, and can see the same object much easier. Our planet is kind of like being on a Waltzer ride: https://youtu.be/RPMLRgKWefs

After putting my camera off and away again, thinking the photos posted yesterday were the last sunrise opportunities I’d see, as I neared the city, I turned a corner and met this lovely scene with the sunrise framed by a bridge, with trees and grey sky above providing a fascinating contrast. 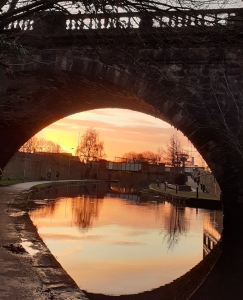 My recent books, featuring my own previous nature photographing: 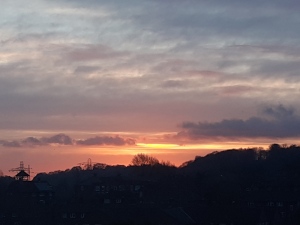 It’s November 21st again, and that can mean only one thing: mistYmuse (Most Ideal Sunrise Times – Midwinter Until Spring Equinox) is here once again, and planned to see you through the northern hemisphere’s traditionally toughest weather four months; especially for SAD (Seasonal Affective Disorder) sufferers.
I’ve seen loads of great twilight times photos on the news this week, which has thankfully been quite clear and dry. Here’s one I prepared before, from a magical day on the Hafnarfjord in Iceland in the inaugural mistYmuse of 2017/18; perhaps when the idea really took shape, after seeing how Iceland extend their winter celebrations into February: 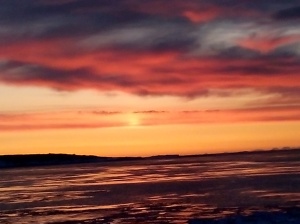 Longest Festival in the World?

Great news, and there’s even better, because #mYm2019 is set to be bigger than ever; okay, last year’s was the first full one, after creating the idea half way through the previous winter!
Let’s get the party started with a concert song from a decade ago I recently saw, starring Scooter with a great gYgPOP (greenYgrey PinkyOrangePurple) stage show. There’s no sound on that, so I’ve also included the song with sound.

The concert footage is from the same year as my original winter sunrises video, which is basically what mistYmuse is most about:

In a way, it’s quite apt the Scooter concert footage doesn’t have sound, as neither do sunrises!

With Halloween and Bonfire Night finished and a month and a half of dodgy weather doldrums in the northern hemisphere until Christmas I’m sure you’re all delighted mistYmuse 2019 (#mYm2019) starts in a fortnight (not fortnite!).

To begin the countdown (not to the full moon, like in the old greenYgrey days!) here’s another essential on the greenYgrey calendar!

The Cult’s show at the Leeds o2 Academy celebrating their classic Sonic Temple album’s 30th anniversary was chosen as this year’s gYg of the Year, supported by Piston.
So they have been added to the prestigious gYg rock n’ roll hall of fame, now in its second decade:

Here’s a video I took of their opening two numbers. Sun King was my favourite track from Sonic Temple, but there are many great songs in that album and others.
I of course married the Sun last year, but don’t consider myself a king; more a consort!
The Cult were my favourite British band of the late ’80s, after Rainbow and Saxon in the early ’80s.
While Guns N’ Roses were my favourite band, I thought The Cult’s Electric and Sonic Temple would have been worthy successors to Guns’ Appetite for Destruction; and that was probably why Guns poached drummer Matt Sorum from The Cult when Adler had problems during Guns’ follow-up Illusion sessions.

If you liked any of the above, you may like my books, full of ’80s/’90s rock band references. I’ve joined the Woodland Trust to offset paper.

Last week we reported the Tour de France Le Grand Depart Le Grand Coincidence, with Yorkshire also using a yellow Y like the greenYgrey, and focusing on yellowing the greenYgrey Yorkshire countryside in celebration of the world’s longest cycling race starting in the English county of Wensleydale cheese and many a golden summer ale.

Hi, it’s Paco Wolfsang, satirical comedy fashionista apprentica with another sweetly soporific sorty into the world of greenYgrey fashion, packed with high season hues guaranteed to put a smile on your slacks.

The coincidences kept coming on the day of the race too you know, and one was of particular interest to the fashion department in the greenYgrey.

That was Princess Kate, the Duchess of Cambridge, starting the official race at Harewood House with princes William and Harry in the greenygrey outfit made famous on this year’s Oz tour, where she visited many places made famous by Grey on its epic virtual ramble across all parts of Australia in Werewolf of Oz: Fantasy Travel by Google Maps.

After a wet Friday afternoon and Saturday morning the thick clouds cleared by the time Le Grand Depart sent the 198 cyclists off on their epic Tour.

This made it a sunshine after the rain day in line with the Berri dance anthem adopted by the greenYgrey in May this year.