London fashion week has been such a whirl Naomi Mdudu beat me to the breaking story in yesterday’s Metro. Yes, it’s all over now, and it was such a wonderful whirlwind my mind feels like my House of Holland clogs hardly clattered the catwalk crowd kerfuffle, but my legs tell me something else.

Talking of brands, as I will be soon, I think Jo Brand is funny too.

First of all, apologies to you if you tried to read the Greenygrey yesterday morning and the website was down. We hoped that it was because lots of fashionistas had logged in to check out the new greenygrey fashion developments from the London Fashion Show, but it was just one of those Gremlins.

Secondly, apologies to Stella McCartney. You know, I love Stella really (but her mother Linda’s veggie sausages more!) and our rivalry is just a greenygrey media creation.

I think Paco Wolfsang must have got carried away with it, because my apprentice fashionista totally missed Stella McCartney’s greenygrey spectacular at London Fashion Week in his LFW report.

Thankfully, more experienced fashionistas at the Metro newspaper spotted the greenygreying spectacular, and through the wonders of modern technology, I have now imported them into the Greenygrey world for your delecation:

The Board of Greenygrey Fashion Quality Control has controversially passed Stella McCartney’s outfit as greenygrey:

There was nothing controversial about Stella McCartney’s synchonised greenygreying display:

Hi, it’s Stella Lagerwolf-Bruno, comedy-satire fashionista suprema @ Greenygrey central, with influences including Stella McCartney, Karl Lagerfeld and Bruno. Yesterday saw the passing away of Margaret Thatcher, Prime-Minister of Britain during the 1980s, when Marc Latham was a youth. Marc was a  scruffy socialist at the time, totally opposing the attack on the unions by Thatcher. Oxymoronically, he did also dream of escaping to LA: to live a life of heady hedonism with Guns N’ Roses and Motley Crue on the beaches and in the clubs of the acutely capitalist City of Angels.

I think I know how Marc felt this morning, as I mixed listening to the divided bitter opinion about Margaret Thatcher with forming this post about the united happy London Fashion Week Spring/Summer collection 2013; like a DJ using two decks!

In digression, is genius at its essence simply the mixing and connecting of two seemingly unrelated data, materials or issues?

And today’s blog is now of course in line with yesterday’s poetry post about mixing depressing news with escapism, in line with Greenygrey theory.

The Greenygrey has looked for the meaning of everything in the human world, and at the moment thinks the answer is to be found more in fashion than politics.

Returning to London Fashion Week’s Spring/Summer 2013 show was a real trip down memory lane; a lane that felt unlit when first found. After entering the highlights, I couldn’t relocate the spring/summer collection at first, and thought it might not be there any more!

But then my logical mind kicked in, and I thought it must still be there, what with spring having briefly returned to the UK on the weekend. Then I saw the little arrow next to Autumn/Winter 2013, and found my way!!

Having found my way on the path to fashionable spring/summer 2013 I then had to decide a research method, as there were so many great greenygrey and other outfits.

So I decided to choose the first great greenygrey outfit, rather than plough my way through them all. However, after I had chosen Day 4s outfit, Daisy Lowe‘s cool rock chic look enticed me into the video highlights, and I noticed a great greenygrey number by Burberry Prorsum (reminding me of the great Dame Edna, a lover of possums and star of Werewolf of Oz: Fantasy Travel by Google Maps), so I included that too. Then I noticed we didn’t have any blonde models, and I didn’t want to be accused of blondism, so I included a blonde model from Day 4 too; making Day 4 rather hectic!!!

The video highlights also alerted me to how much Ab Fab greenygrey there was at the fashion show too; including on the logo and catwalk. So I quickly snapped up a couple of images to introduce the post.

Wow, this was intended to be a quick easy blog, and has turned into something of an epic. Anyway, although there was a lot more greenygrey on view, that’s all for now, and on with the show: 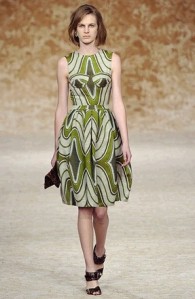 But it was Antipodium on Day 2 that stole the greenygrey show, with several great greenygrey delights:
Dress and shoes: