While the story is amazing, and as a coffee-loving world traveller myself I admire Rafael’s ambition, it was the photo that totally intrigued me.

Yes, Rafael has been supplementing his Starbucks search with a lotta greenYgrey boomeranging on the side.

While he may never achieve his ambition to visit all Starbucks because so many are opening all the time, he has achieved the complete greenYgrey boomerang.

Rafael achieved the perfect  gYgboo by wearing a grey shirt under the green Starbucks sign in sunshine.

The computer programmer might have been showboating with that shop, because under the obvious upper level there’s another greenYgrey layer, with the outside of the shop having a green and grey look, and yellow lighting inside.

After the Greenygrey was the last new scientific wonder of the world when it emerged into the human world in 2008 it seems planet Earth is already ready for the next one. That’s according to Ben Gilliland in Metro’s Microcosm anyway, although he doesn’t mention the Greenygrey part.

Moreover, in a hot off the press Greenygrey double bill, there’s also today’s amazing image of a light on the Mars surface, which life on Mars believers claim is evidence of something living under the surface.

Gilliland was talking about the Square Kilometer Array (SKA), which ‘will be the ultimate in Universe-probing radio telescopes. Made up of hundreds of thousands of individual radio telescopes and built across South Africa, Australia and New Zealand, the SKA will have the resolving power equivalent to telescope with lens measuring one square kilometre. ‘

Seeing to Beginning of Time

Moreover, after I reported greenygrey present in the universe soon after the Big Bang last month, SKA will be able to see back to the time before the universe we can see at the moment was created; when there were just gases and no solid forms.

But never fear, there are loads of great greenygreylien images online, thanks to Martians being perceived as green.

Talking of Martians, but not greenygrey coloured, although in line with Greenygrey theory, an exciting new photo today showed a spark of light on Mars; reported in Metro today by Jimmy Nsubuga.

It was taken by the NASA Curiosity Rover, which is like a futuristic Greenygrey robotydog.

Believers in life on Mars, who could be seen as the Green theorists, claim it is evidence of Martians living underground; while sceptics, who could be called the Grey theorists, say it is a cosmic flare hitting the Martian surface:

Yes, that was the first image of the documentary, as you can see from the 00.01 time. It could have been a long-lost greenygrey world for all I could decipher. And I wasn’t that far off. It was a dragonfly’s eye in an insect greenygrey world; known as a pond by humans. 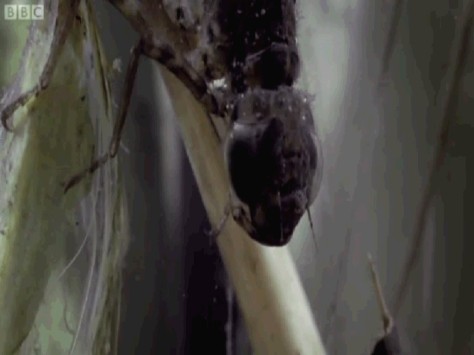 It would soon metamorphise into a nice bright pretty colourful dragonfly, as Greenygreys can shapeshift; but dragonflies only do it once in their short lives; leaving its greenygrey past (as seen in the image) in the background, and fly out above the plants and water into the sun.

It was a promising start to Wonders of Life, and nice to see Brian did a great grass and shirt greenygrey photo shoot for the series cover shot.

I’d have preferred a wolf pup of course.

How the Universe and Life Works

In a similar vein, Ben Gilliland provided a fantastic introductory summary to how the chemistry and physics of life and space works in the Metro newspaper (March 21st, 2013). It’s also available on his cosmonline blog.

Put Your Hands Up by Joel Robinson

Talking of similar veins, Joel Robinson’s Put Your Hands Up highlights the connections between humanity and nature in his artwork; sometimes using glorious greenygrey; as with these images showcased on the eMORFES website: