Sun sees sin s
o own our one so
ul universal udder.
(cos Santa’s on way!)

Prose book from my literary nonsense writing style period, before getting more classical with XaW Files: Beyond Humanity; and poetry book that mixed humour with seriousness (not available on Santa direct, so please don’t wish for them!).

Hi, it’s Greenygrey. We returned from our unsuccessful mission to find Andy Wolfhol only to discover a postcard with ol’ Wolfhol’s uniquely distinctive and almost surely impossible to forge signature on the blog. We looked all over the Greenygrey world, but it looks like he’s on some alien world.

We’ve been looking for a collective name for Greenygrey fans, which I hope includes YOU, so we’ve decided, in honour of Andy Wolfhol, to name you Greenygreyliens.

So Greenygreyliens, I’m sure you’re all eager for another helping of the comedy-fantasy epic classic Werewolf of Oz: Fantasy Travel by Google Maps.

Before that, a little news. Grey got a little carried away in the last episode, forgetting that we don’t have a clear understanding of our pre-Greenygrey’s Rambles past, so its recollections of seeing the premiere of Treasure Island has been changed to:

‘I thought I remembered going to the premiere of the Treasure Island play as one half of the Greenygrey back at the start of the twentieth century, so it brought back fond possible memories; remembering of course that Green and I woke up on the western coast of Canada not knowing from where we originated.’

After all that, I’m sure even the most diehard Greenygreyliens are glad it’s quite a short episode today. It is also an all literary nonsense exciting episode thrilling tale, with the pirate of the last episode revealing its true identity, leading to a sea battle of sperm whale and giant squid proportions.

I descended below deck to tell the others
the ship jolted violently before going overs
an eternity seemed to neverendingly pass
hurtling upside down in the strait of Bass.

The green crocodile rolled our ship
creating a nightmare morning trip
then it took us into a vertiginous dive
like a honey hunter digging into a hive.

It was looking for something but I knew not what
Captain Ahab hunted Moby Dick so I had a thought
that maybe Pirate Lacost was not what it seemed
but really ‘Monotonous Monotheist’ I screamed.
It emerged in bubbles, sound drowned in sea air
and maybe it was lucky, with panic not a good idea.

I swam back up to the top of the deck
wondering if I’d end up nervous on a shipwreck
and how could I survive a Davy Jones’s locker fate
with a green crocodile snapping at my sea legs gait.

Hi, it’s Greenygrey. It’s time for the second episode of Werewolf of Oz: Fantasy Travel by Google Maps of the week, and with its sporting theme its the perfect warm-up for the weekend… and if you’re in Britain you’ll need some warming up!

The literary nonsense poetry is really warming up too, with this episode another one that is completely poetry.

With the Rainbow Valley extended adventure a recent memory, this episode sees the travelling trio trying to choose between Crows and Redbacks, with their chances of escaping the timequake tumult dependent on the decision. Here it is:

We got in a huddle
and a bit of a muddle
working out a preamble
to finish our ramble.
I rubbed my hat
until it was flat
and then it shone:
a sign of game on?

The crows have two wings
talons and beak,
redbacks have eight legs
a fiery streak.
Who will win the contest
it is difficult to decide;
could be down to injury
or a contentious offside.
Choosing could be
a hat-trick calamity
for three travellers
trapped outside normality. 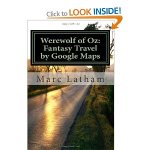