The football World Cup 2014 kicks off tonight in Brazil, and one thing’s for sure, there’ll be lots of greenYgreying going on, what with the Brazilian flag and kit including two of the three essential elements, and the Brazilian coaches often wearing grey tracksuits.

On Friday the pick of the games is Netherlands v Spain, then on Saturday it’s England v Italy.

That’s subjective of course, and doesn’t mean they’ll be the best games.

Mexico v Cameroon and Chile v Australia will be the top games for fans of those four countries on Friday, and they may provide better games.

On Saturday, the same is true for Columbia v Greece and Uruguay v Costa Rica before the late game.

The World Cup of course plays a big part in Greenygrey/greenYgrey history. The Grand Council took over the Greenygrey world in 2010 after stating it wasn’t happy with the Greenygrey’s World Cup predictions accuracy.

As still described on the Australia Traveller blog, Greenygrey was then divided, with Green imprisoned while Grey was deported to Oz. They didn’t know Y at the time.

This of course led to Grey’s epic Werewolf of Oz: Fantasy Travel by Google Maps book, after Green escaped the Grand Council’s clutches, and Grey returned to the liberated Greenygrey world.

It was Viva Greenygreya on the weekend, as I saw some great greenygrey action in Spain at the Formula 1 Spanish Grand Prix and the Madrid Open tennis tournament.

Lewis Hamilton and Nico Rosberg did the 1-2 in the Spanish Grand Prix to make it another double-double since my last satirical comedy sports report, after the two Mercedes drivers finished in the same positions in the Chinese Grand Prix two weeks ago. Mercedes is of course known as Team GG in the greenYgrey world.

After the Spanish Grand Prix, Team GG via Mercedes has extended its lead over old inspirations and friendly foes Red Bull by over 100 points: 197 to 84.

Tennis players warmed up for the French Open later this month in the Madrid Open. It was won by old Team GG stalwart Rafa Nadal, who is dominant on clay, which isn’t very greenygrey.

However, there was still lots of great greenygrey action, as the stadium made up for the surface.

Although werewolfish Nadal won the tournament, it was his old vampirish nemesis Roger Federer who ironically showed the best greenYgrey form.

Hi, it’s Baron Wolfman, comedy-satire arts correspondent at the Greenygrey. I was delighted to see that our favourite arts website, emorfes, featured a collection of our ol’ partner Marc Latham’s Barcelona photos yesterday.

You’ve seen some before in our Gaudi and Greenygrey post, but there are other unpublished ones too, including some using direct sunlight thanks to a digital camera. You shouldn’t look directly at the sun of course, as it can damage eyes.

Here’s a few more that haven’t been published in either of the above blog posts, followed by another emorfes link; Barcelona is a leader in environmental innovation: 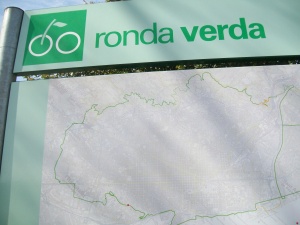 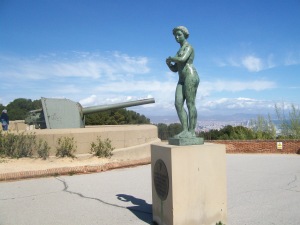 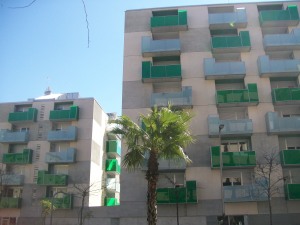 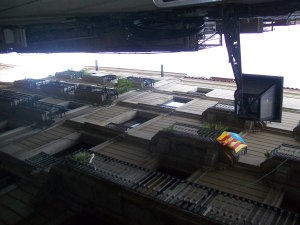 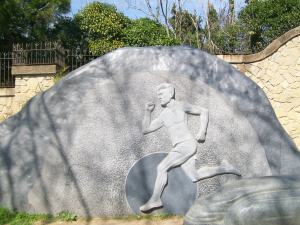 Hi, it’s Martin ‘Werewolfie’ Adams, sports correspondent at the Greenygrey. With Max Cliffwolf on leave for personal reasons, I have been given the fun and prestigious position of temporary comedy-satire sports marketing guru @ Greenygrey. I started the campaign off in Spain this year, which hasn’t had much time for greenygrey, what with its yellowyblue landscape and yellowyred flag.

To begin my cunningly clever campaign I brought out our very own Yellowstone geyser geezer, Old Faithful, Marc Latham. Kitting him out in greenygrey, I sent him off on a 26.2mile/42km jog around Barcelona for their marathon 2013.

While Marc didn’t hit the headlines, or finish in his fastest time, putting a positive spin on it he did run for the longest amount of time in his career, finishing in 4 hours, 27 minutes and 50 seconds.

Barcelona 2013 became the fourth in Marc’s post-first-marathon-in-2004 ambition to run a marathon every three years until he’s 50 in 2016. So, one more marathon to go, all being well in three years.

There are photos of Marc Latham running in the Barcelona Marathon 2013 available at Marathon Photos and a video at MySports. Marc was number 9269. Here’s the first photo, of Marc crossing the line (he says he didn’t feel as tired and slow as he looked in some of the photos and videos!):

Hi, it’s Greenygrey. We’re becoming worried about a couple of disturbing developments in Britain. The first is that the government seems intent on building over green belt land, with plans to bribe local residents so that they don’t oppose building near their homes. The other is a badger cull that seems to go hand in hand with the building on green belt: putting human construction/destruction before the environment and wildlife; sending our balance between green and grey off kilter.

There are now thousands of houses empty in both countries. Just think of the waste of money and environmental wellbeing in both cases.

While we totally agree with building when needed, there seems to be plenty of already concreted space and empty buildings available, instead of concreting over green belt to build houses that remain empty afterwards.

While other countries live with large animals like wolves and bears it seems that we in the UK have trouble tolerating animals like foxes and badgers.

The government is starting a trial cull of badgers, instead of vaccinating them against TB, which badgers might be passing on to cattle or vice versa. Apparently it would be too expensive or difficult to vaccinate the badgers.

It seems that the government is showing a lack of originality or innovation in its economic recovery plans, just resorting to building, not knowing whether its needed or not. They will destroy some of the British landscape in the process, both by building on it and resourcing the production materials.

We do applaud more environmentally-friendly building materials such as those used to build the Olympic park, and hope that building workers find enough work in non-green belt areas.

However, we think that the government should be more innovative with their policy for British growth; thinking greeth not greyth; and create jobs in saving life and the environment, rather than killing it off without knowing if it will have any real benefit to the population and country.

Hi, it’s Harry Silhouetteof-Wolfhowlingonhill, TV correspondent at the Greenygrey, and Andy Wolfhol, creator extraordinaire at the Greenygrey, bringing you a read one, read one free bargain British bank holiday blog bonanza from your favourite value for reading website. After the Chinchillas of Goya (COG) played a central part in Grey’s final battle in its epic comedy-fantasy classic Werewolf of Oz: Fantasy Travel by Google Maps I was thrilled to see the BBC had a documentary about the Spanish painter who created the chinchillas.

Robert Hughes searched for the truth behind the myth of Romantic-era artist Francisco Goya in the BBC documentary, after Hughes had written a book on the subject; Goya was Spain’s leading artist during the Napoleonic occupation of the country.

It was a fascinating tale, depicting Goya as a classic artist who tried to use his art to show the reality of human nature, and how he was prepared to suffer the backlash likely to follow. This was epitomised by his self-portrait wearing a matador uniform, symbolising his role as a provocateur.

Hughes thought Goya had no option but to try and paint the world as he saw it, as to hide the truth he needed to release might have sent him into madness.