Today’s episode of the XaW Files: Fantasy Travel by Google Maps Across Eurasia uncannily and uncaninely features the Wombles of Wimbledon just after the Wimbledon tennis tournament took place.

The Wombles are set to return, like Monty Python and Dangermouse, in a revival of good 1970s British culture.

By the way, there’s so much sport been going on lately that William Wolfsworth called himself a sport correspondent yesterday. He does like a game of football, but I think that was an own goal.

Chekhov’s statue returned to its plinth position and stood still and silent as if nothing had ever happened.

I was wondering what to do with Sibiryakov’s body when a Womble I remembered as Tomsk wandered along and cleared the body up.

I thanked Tomsk, and said I’d been a fan of his when the Wombles were at their peak, although Orinoco was my favourite. I asked him where Orinoco is now. Tomsk replied that he’d returned to his river in South America.

Tomsk asked if I knew Sibiryakov, as he brushed his body up into his bag.

I said I had met him on the road to Irkutsk, and he’d seemed a very interesting travel companion.

Tomsk said it was a shame, but Chekhov’s gun kept on being used, and many fictional characters had been killed by it over the years.

‘Still, I suppose it keeps me in stories, and gives my work a deeper meaning,’ added Tomsk.

I replied that it did seem to have matured a lot since its time on Wimbledon Common.

Tomsk sighed, ‘Ah, they were carefree days I look back on with fondness. I was young then, and living far away from home. Returning to my Russian city made me seek a bigger mission in life. I had collected so many pieces of paper and sweet wrappers I was ready for a new challenge. When I saw the bodies piled up around the Chekhov statue it rekindled my enthusiasm for public health and sanitation. Chekhov’s statue is alright most of the time, it’s just when it hears philosophical and literary talk that it wakes up and uses its gun.’

‘Well, I’d better be off,’ said Tomsk, ‘it was nice talking to you. I’ve been expecting you for some time; since I told Sibiryakov about you in Tobolsk.’

I remembered then that Sibiryakov had indeed told me that Tomsk had told him about me. I asked Tomsk if there was some meaning to the connection between the three of us.

‘It is the self-fulfilling philosophy of Chekhov’s Gun,’ replied Tomsk, before he shuffled away along the Tom River banks looking not unlike he had on Wimbledon Common.

It was Viva Greenygreya on the weekend, as I saw some great greenygrey action in Spain at the Formula 1 Spanish Grand Prix and the Madrid Open tennis tournament.

Lewis Hamilton and Nico Rosberg did the 1-2 in the Spanish Grand Prix to make it another double-double since my last satirical comedy sports report, after the two Mercedes drivers finished in the same positions in the Chinese Grand Prix two weeks ago. Mercedes is of course known as Team GG in the greenYgrey world.

After the Spanish Grand Prix, Team GG via Mercedes has extended its lead over old inspirations and friendly foes Red Bull by over 100 points: 197 to 84.

Tennis players warmed up for the French Open later this month in the Madrid Open. It was won by old Team GG stalwart Rafa Nadal, who is dominant on clay, which isn’t very greenygrey.

However, there was still lots of great greenygrey action, as the stadium made up for the surface.

Although werewolfish Nadal won the tournament, it was his old vampirish nemesis Roger Federer who ironically showed the best greenYgrey form.

Hi, it’s Martin ‘Werewolfie’ Adams, comedy satire sports correspondent at the Greenygrey, inspired by darts legend Martin ‘Wolfie’ Adams. Great news (if a little late) from the U.S. Open tennis, where Team GG’s star member, Rafa Nadal, won the men’s title in a great final against Novak Djokovic. Moreover, it was a return to greenygrey form for Nadal, after he’d worn an alternative kit while winning the French Open.

The U.S. Open can look greenygrey from afar, as shown in this image (mind the gap):

But it is in fact greenyblue.

Therefore, Nadal could combine greenygrey colours in kit and racket without making himself invisible and gaining an unfair advantage. The racket green was on the verge of being yellow, to stand out on the green court:

We had some mixed feelings yesterday, as Rafa Nadal wore an away Team GG kit, while Novak Djokovic almost wore greenygrey.

With Nadal the werewolf of the top men’s players, and Federer the vampire, Djokovic must be the very strong and good looking (being diplomatic not gay for all homophobic people) Frankenstein.

So in the end, we had to plump for Nadal… after he won! Commiserations to Djokovic, who reminded us of our close letter relative F in defeat, with our G(G) getting all the gglory in recent years.

So, wishing the weekend’s finalists luck, we remember those who took part too, as we can relate to them in the letter world: there would be no G without an F before it.

And maybe the F would be where the G is today, if it hadn’t shared the F sound with PH. So, here’s some fun fantastic French Open photos… in glorious greenygrey:

Never mind the Mexican wave! Crowd get into greenygreying:

What they are all playing for: nice greenygrey presentation!:

And we noticed a great coming together of greenygrey venue and greenygrey kit at the recent Shanghai Masters tennis tournament. We just looked up some photos from the tournament; bit late to be topical we know, but it’s been a busy Greenygrey news week; and the Denver Post has a great selection of photos from the men’s tournament. So we just have men’s photos below, which is due to us finding enough material there, rather than sexism or sexuality. And here they are: 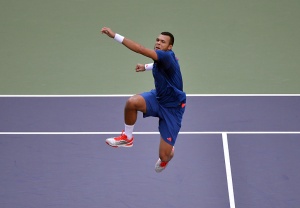 Jo Wilfried-Tsonga looks overjoyed to be playing amongst greenygrey.

Is Tomas Berdych getting into the greenygrey spirit of things, or trying to camouflage himself? Nice greenygrey design anyway, and thanks to Tomas for wearing our colours. 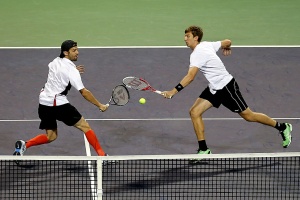 Are Petzchner and Butorac re-enacting the Werewolf of Oz scene when Green and Grey were reunited during the Battle below Bass Strait? 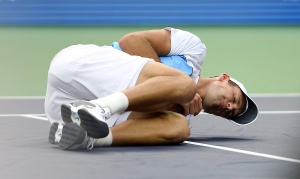 Kubot takes a time-out with the greenygrey.

Thanks to the Shanghai Masters for all the great greenygrey photo opportunities, the players for taking part in glorious greenygrey, and the Denver Post for sharing the photos.

Hi, it’s Greenygrey. There’s a sporting transition going on this week that we find quite greenygreyesque, with the Y of course linking us.

Olympics 2012 athletes have been enjoying homecomings this week, and we think this culminates today with heptathlete Jessica Ennis’s celebration in Sheffield. So we thought we’d ask Andy Wolfhol to commemorate the day with a little poem, what with him being a creator extraordinaire. And we’re glad we did, as he produced this masterpiece:

This is quickly followed by the beginning of the four major English football leagues this weekend. The big weekend is not as welcome as it is in a summer when there’s been no European Championships football and an Olympics, but we’re sure it’ll become enthralling again once underway.

Good luck for the season, and especially to Leeds United.

But Andy Murray has managed to win through to today’s Wimbledon men’s singles final, and there has been enough greenyblue weather to keep the tournament on schedule; although we are proud that the greenygrey centre-court roof did help.

Hi, it’s Greenygrey. While ‘Werewolfie’ has been keeping us updated on the Euro 2012 football championships we’ve been at the Wimbledon tennis tournament. We’ve been very impressed with the way the greenypurple has led from the front.

While the greenypurple enjoys the limelight in the foreground, guess who’s doing most of the work in the background…! Not that we’re complaining; we’re just glad to be there: 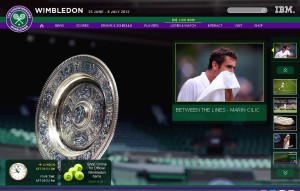 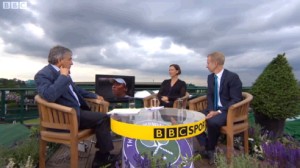 The greenypurple has also taken a back seat at times:

And we’ve worked independently sometimes too: