Hi, it’s Greenygrey. Sorry we haven’t been able to bring you your weekly Werewolf of Oz recently, but we were operating a secret mission to try and find Andy Wolfhol. We had a tip-off that he’d been sighted in the north, but  when we returned to the blog from our travel quest we found a postcard with ol’ Wolfhol’s distinctive and almost certainly impossible to forge signature suggesting he is somewhere southerly.

I hope you enjoyed the last thrilling episode of Werewolf of Oz, when MiMo Moby helped save the day and I was reunited with myself. Unfortunately, it wasn’t to last, and this episode is a bit of a tearjerker; although that wasn’t to last either, and we’re now back together of course. Anyway, I don’t want to give too much away, so on with the Werewolf of Oz: Fantasy Travel by Google Maps show.

P.S. I also noticed that I had included Ant n’ Dec as a reference in this chapter rather than the first one they appeared in, so was getting ahead of myself when I added it afterwards in the last episode posting on this site. I remembered thinking of it, but thought I’d decided not to include it!

68.  GREEN AND GREY SEPARATE UNTIL ANOTHER DAY

Green and I were reunited once more into the Greenygrey; and Bonzo, Elle and Angry were excited to meet us together. When everything calmed down, we/I (Greenygrey!) cooked up a Bass Strait brunch for the whole bunch, and we discussed the previous day’s exciting events.

Bonzo said he’d been asleep when all the excitement happened; he’d been that dog-tired! Elle said Angry’d suggested she rush up and grab our assailant around the neck. I thought it was a good use of Angry’s mind, and Elle’s body; they certainly seemed to be getting their confidence back in those areas.

We all hoped MiMo Moby would survive the deadly duel, and wondered if we would see him again on our journey. My hat seemed to glow when we talked about MiMo. Unfortunately, there was no sign of Dai n’ Dec; we hoped they were safe somewhere.

At the end of the meal we, Green and I, unfortunately had to announce that we would be parting again. The others were disappointed, but the Greenygrey world needed Green, and I thought I should conclude this quest on my own.

Green shapeshifted into an albatross for the long journey back to the Greenygrey world. We climbed to the top of the mast to wave it off, singing Vera Lynn’s ‘We’ll meet again.’

As Green albatross reached the horizon it looked back, did a roll, and tipped its wings; before disappearing from view into the azure. 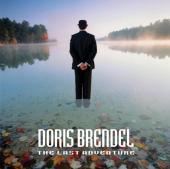 Without hearing the lyrics of the album, or reading any of Brendel’s explanations, the image reminded Marc of Pink Floyd‘s Vera song, so he interpeted it from that perspective within the Folding Mirror form.

Vera Lynn was a heroine in World War Two, travelling to entertain troops around the world, despite the grave danger to herself.  She was perhaps the female Churchill, in terms of raising spirits and keeping the country motivated during the terrible times it was suffering.

However, Lynn’s song lyrics that We’ll Meet Again of course didn’t always come true, in mortality at least, and Pink Floyd’s Roger Waters lost his father in the war.  So, he sang from the loss point of view on The Wall album.

In Afghanistan, British forces are now fighting their deadliest and most justifiable conflict since World War Two against Al-Quaeda and the Taliban.  Many service people have lost their lives trying to improve conditions for ordinary Afghan people, and at the same time defending Britain from further terrorist attacks.

Whether their lives have been wasted, as so many British lives were in World War One, or if they will have made a difference, like in World War Two, ultimately depends on the politicians involved.

Armistice Day is this Thursday, November 11.  Remembrance Sunday is on November 14.

The folding middle line appears at the top of the poem, with the two halves below it in a timeline, which is another first for the Folding Mirror form.