Marc Latham’s latest Folding Mirror poem is an ekphrastic one  inspired by a wolf calendar photo. The October wolf’s grey paws seemed to join it to the rock it stood on, so the connection between wolf and Earth seemed a good topic for a mirror poem. Here it is:

both stand on rock, green and grey coloured

Hi, it’s Baron Wolfman, head honcho of Greenygrey creation in the absence of the legendary Andy Wolfhol. I’ve been storing up some greenygrey Facebook goodies for winter, and am sharing them with you below.

I’ve got lots of nice wolf photos, and a few others with great greenygrey scenes. The names of those who posted them are under the photos, and the photos link to their Facebook pages.

In this first one, a wolf seems to be enjoying greenygreying on a cold morning… or doing an impression of the genie’s lamp!

Just a cute pup enjoying a snooze with the warmth of its parent amongst great greenygrey nature in this photo:

Nice greenygrey trees behind this wolf:

Nice mixture of human and rhino greenygrey in this photo, with some vegetation to complement the main scene.

This kangaroo doesn’t seem into boomeranging!

Hi, it’s Baron Wolfman, head honcho of Greenygrey Creation in the absence of the legendary Andy Wolfhol, who is perhaps most fondly remembered in the Greenygrey world for his favourite slogan catchphrase ‘Wolf not War’.

It’s Halloween week this week, with the main night in of celebration on Thursday 31st October. Halloween and similar traditions, such as the Day of the Dead deriving from Mexico, were inspired by old pagan festivals honouring the dead as they experienced the sun ‘dying’ in the northern hemisphere at this time of year.

Here’s some fun and greenygrey photos to celebrate Halloween, with links to their original sharers on google+ within the images, and all the good people and animals that have left the living world:

Four-way greenygrey trowl (tree and owl) photo, which could also be described as poetry in owl tree:

Something fishy going on: cat amongst the greenygrey:

No werewolves, just a Halloween-loving wolf:

Hi, it’s Chris Packwolf, nature and wildlife correspondent at the Greenygrey. First of all, I was pleasantly surprised to see a great greenygrey photo of a wolf in the wild on the BBC‘s morning news paper round-up from today’s Independent newspaper.

The sad part is that it is inside the Chernobyl environment, which was said to  still have a radiation problem after the nuclear fallout of 1986. No humans have returned, so wildlife is said to be thriving there.

The best news is that the animals studied there are not showing any signs of deformities from the radiation. In an ideal world, humans will soon return and live in harmony with the wildlife that is acting as a safety scout.

Marc Latham’s new Lost Land of the Tiger BBC documentary article for Suite 101 was going to be the headline news today, but the greenygrey wild wolf story scooped the top story spot this morning. There’s never a dull moment at the Greenygrey.

It’s still a very interesting article though, with the amazing documentary leading to an intriguing controversy. Hopefully it won’t distract from the most important issue raised: conserving tigers and other wildlife.

People with access to the BBCiplayer can watch the documentary today up to 7.59pm GMT.

Hi, it’s Greenygrey. We’re proud to announce that our Wolf of the Year 2012 is OR7, who at the end of last year became the first wild wolf in California since 1924. Moreover, it also posed for a great greenygrey gif.

Its lean appearance suggests life is hard on the wilderness road for a lone wolf in new territory, but it is probably enjoying its freedom and new experiences.

Cuter than Alexandr Orlov’s meerkat pups, these new wolf pups on the Defenders of Wildlife facebook page provide hope for the survival of the species, and wolves continuing to provide great greenygrey gifs.

Right Whales get it Right

And while we were wolf-watching on the Defenders of Wildlife facebook site we couldn’t help noticing one of the few remaining Right Whales having a whale of a time getting greenygreying right. 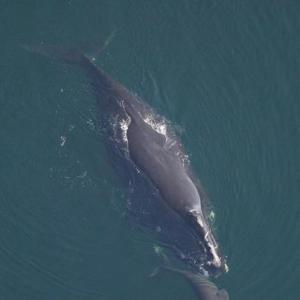